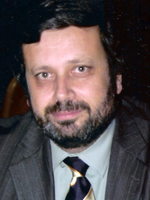 Prof. Nikitas Nikitakos
Prof. N. Nikitakos is a graduate of Hellenic Naval Academy (1980) and holds a B.Sc. in
Economics (University of Piraeus 1986) and 2 M.Sc. from Naval Postgraduate School,
Monterey, CA, USA (M.Sc. Electrical. Engineering. and M.Sc. in Appl. Mathematics). He spent
25 years as Naval Officer (Captain H.N. ret.) when he participated in several NATO and EU
committees, He received a Ph.D. in Electrical and Computer Engineering from National
Technical University of Athens (1996). He is Professor of Shipping Informatics and
Communications and was Head of the Dept. of Shipping Trade and Transport in the
University of the Aegean (2005-2009). He has participated mainly as coordinator/principal
researcher in several European and regional related research projects. He was AMMITEC’s
(Association of Maritime Managers Information Technology Electronics and Communication)
president from 2006-2010 and currently President of Aegean Institute of the Law of the Sea
and Maritime law in Rhodes. He holds 3 international patents on environment and
renewable energies at sea and he was awarded from Lloyd’s List on Maritime Technological
Innovation in 2006 and from EU-DGRegion for his work on isolated islands. He has published
5 books and many articles in international referred journals and conferences. He is visiting
Professor at Shanghai Maritime University, Hangzhou Dianzi University – China and NMIT –
Malaysia. He holds an ISPS, PMP, PMI-RPM Princ2 and SCRUM certifications